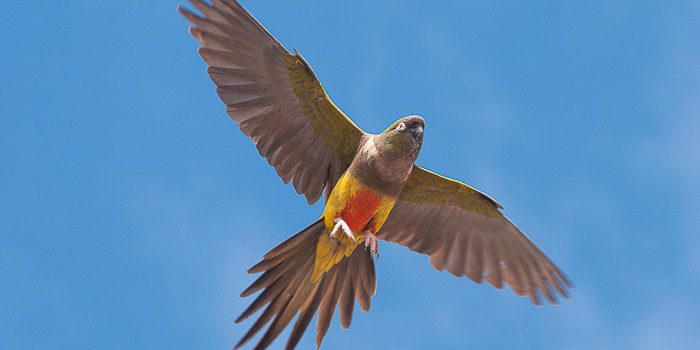 They are usually seen on Peninsula Valdes during the spring and summer months. It mates for life and nests in cliffs. They dig a deep burrow in which 2 to 5 eggs are laid. The eggs hatch in late December. The Burrowing Parrot is very colorful and has seven colors in its plumage. On Peninsula Valdes, they are usually seen in flocks of 10- 20 individuals and are very noisy, constantly chattering. Their diet is based on shoots and fruits of shrubs, and they also travel great distances to feed in other regions, attracted by planted fields. This frequently leads to conflict with farmers, because they eat the seed and damage crops. 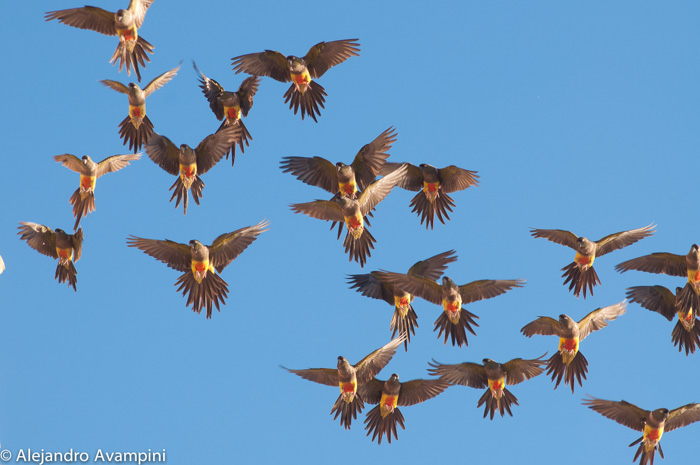 We would like to recommend a unique place for travelers, birdwatchers and those who are attracted by birds and nature. 550 km north of Peninsula Valdes, there is a town called El Condor, the Viedma’s beach, capital of Rio Negro province. There is one of the largest parrot colonies in the world, comprising over 100,000 Burrowing Parrots in 5.5 mi ( 9 km ) of the cliff, something which cannot be seen anywhere else on the Planet. We were surprised when we saw this incredible cliff, another natural wonder of Argentine Patagonia, which we had never heard of before. If you decide to go spend a few nights at this resort we recommend the Apart Hotel Costa del Faro, located on the coast, just meters from the cliff.