Seagull and the attack to the Whales

It can measure up to 60 centimeters in length, the body is white and the wings black. Gulls are present all over Patagonia, extending to Tierra del Fuego and beyond, as far south as the Falkland Islands, South Atlantic Islands, and Antarctica. They lay up to three eggs, nest and return to the same area every year. They feed naturally on intertidal resources, although their behavior is very opportunistic and has been modified by the food supply generated by humans. Because of this, the growth of populations of gulls has grown-up considerably. They feed in open dumps, eat carrion, insects, grains, small fishes and …whales! The behavior of gulls feeding off whales is, we believe, unique to our region. 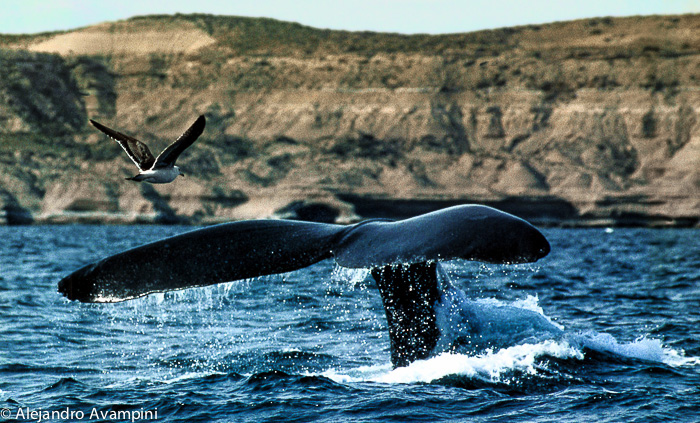 In the last decade, whales have been affected by attacks by gulls, who have developed a liking for the proteins in the skin and blubber of whales. Over the years, the technique that had developed by only a few gulls has been passed on to other birds and new generations, making the attacks happen more frequently and altering the behavior of these giant cetaceans. Moreover, fish discards and waste dumps, and mainly the landfill at Puerto Madryn have led to a huge increase in the numbers of seagulls, which have food guaranteed all year, thus increasing their birth rate. As a result, the number of individuals is growing exponentially in Peninsula Valdes. 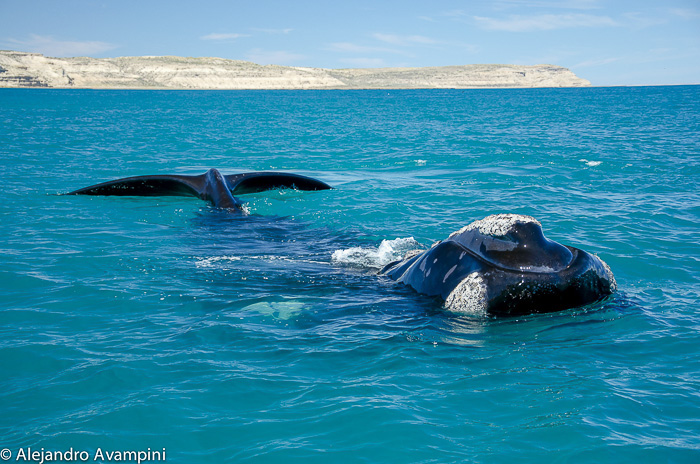 In order to escape the unwelcome and possibly painful attention of the gulls, whales have taken to adopting the “galleon” position, in which only the animal’s head and tail are exposed above water, the rest of the body being submerged. The also try to outwit the gulls by remaining submerged totally for longer periods, swimming and breaching. These techniques involve the whales expending a great deal more energy and, as the Valdes Peninsula is primarily a mating and breeding area, where food is not common, could have an adverse effect on the population.

In 2005, a study group led by Ms. Anne Fazio, Biological Sciences graduate, and Dr. Marcelo Bertellotti, planned a study with three years’ duration, in which the first thing they wanted to know was, if the whale’s skin and fat feeding behavior was or were not widespread throughout the population of gulls. They wanted to ring them, so as to identify them when they were attacking. This task took place at Punta Piramides platform, where there is a nesting colony of gulls. They captured the gulls by means of a cannon- net. The gulls were then ringed with individually coded rings and samples of blood and feathers etc were taken, to ascertain the overall health of the gull population. Despite the great effort and hours of work of the whole group, it became increasingly difficult to capture gulls, because they learned very fast and avoid the traps. In the event, the ringing was achieved only in 20% of the population. In addition, there are seagulls from different areas feeding on whales. Ana says that “(…) for these two reasons, the brand was very dilute, we had only 2% of cases where we saw a branded seagull attacking. Also, with so many hours and days of observation in the water, you could see that even not all the seagulls attacked, it was not a small group, and the worst of all: they were more and more!. 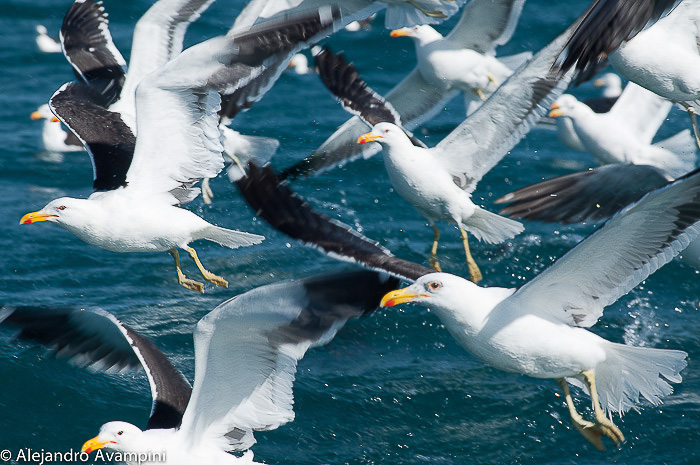 Hundreds of Seagulls in Peninsula Valdes

We also have an overall record of the attack rate during the three seasons of whales watching, knowing the peaks of the curves (times of the increased number of attacks per unit time). This information is very useful since at the time of taking up the study comparisons can be made with other years to see if the attack rate has increased or decreased. In addition, samples were analyzed to search for pathogens with which the gulls can infect whales; we’ve found some and it is something that really concerns us. It is likely that, by moving from whale to whale, the gulls will not only infect the whales with pathogens which they carry but could also transmit as carriers, pathogens, and infections which are carried by the whales. As Peninsula Valdes is an area with a high transient population of whales, including calves, this is a matter of real concern and could have a greater effect on the whales than a mere change in behavior. “ One of the most important conclusions, agreed by a majority, was to close the open dump in Puerto Madryn. We know that populations of gulls increased for many years, until ‘97 and then remained constant. The main causes were fishing discards and waste dumps. That’s why the plan launched by the Province to eradicate open dumps around Chubut is an incredible breakthrough on minimizing environmental impact, and may the get the rate of reproduction of the gulls back into balance.