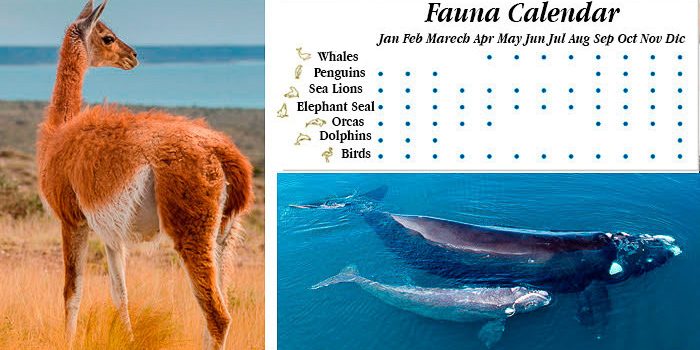 More than 2,000 southern right whales visit Peninsula Valdes. Between April and June, they begin to arrive and leave by the end of December. Peninsula Valdes is considered the largest maternity in the world for this species and other marine mammals.

More than 500,000 Magellan penguins arrive every year in September to live the reproduction, breeding and plumage change period in Peninsula Valdes, to return to the ocean in April.

Thousands of sea lions live the whole year in Peninsula Valdes. They move from the colony of sea lions according to the time of year. In December the males form harems of 2 to 12 females, in the breeding colonies. Between January and February, the babies born the previous year are born and after a few months, they return to the previous colonies.

The orcas, which inhabit Peninsula Valdes, are about 30 specimens, which can be seen in Punta Norte between the beginning of March and April and between October and November in Caleta Valdes. In those months the offspring of sea lions and marine elephants, respectively, born months ago, expand the diet of these orcas. The risky maneuver of intentional stranding, which some of them practice, allows them to have a snack with the family group, offshore. A fragile practice, which only exists on these coasts and with these orcas.

Peninsula Valdes is the only continental marine elephant seal station in the world. Between September and December, the concentration of animals in the colonies is endless.

The Dusky Dolphin is a species that frequents Peninsula Valdes. You can see them at any time of the year. The highest probability and quantity is given in the summer months.

Peninsula Valdes offers a wide variety of coastal environments, ideal for the reproduction and feeding of various species of birds. You can see flocks of flamingos guarding the mythical Birds Island. Ideal for Bird Watching.

There are land animals such as the guanaco, the Patagonian ostrich and other animals that will surprise you on the tours of the Peninsula Valdes routes.