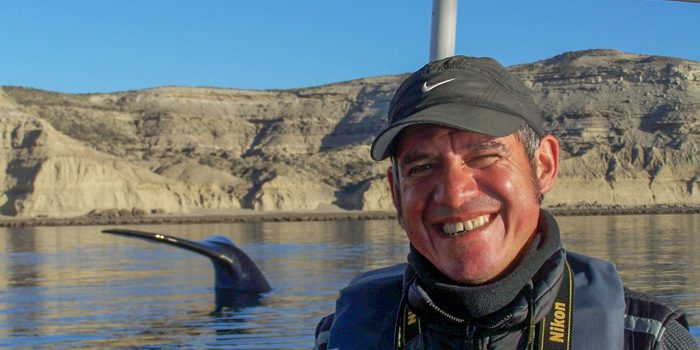 I want to document a right whale birth !!! It is a phrase that I heard my friend and colleague Luis Pettite say, during practically a decade and a half, many but many times. I must admit that although I consider myself optimistic, I constantly disarticulated his dream and told him, but that is very difficult Luis, it is almost impossible. Stop saying stupid things, nobody in the world documented a whale birth. Why do not you ask for something more likely … But the insistence and perseverance of this long-time documentalist who has been sailing the waters of the Golfo Nuevo for the past 25 years in whale watching. Destroyed by force of statistics this terrible and constant intervention of mine.

Whale with her calf in Peninsula Valdes

Between the months of June and July, the first whale sightings of the season begin in Puerto Piramides. Few tourists visit the region, but they are enough to favor the dynamics of the nautical trips to get close to the whales. Coincidentally between June and July, around 200 whales are born in Peninsula Valdes, of which less than 10 are born albinos. This combination of sightings, births and whale albinism is rare. Difficult to match everything to see a white whale. Usually, a giant whale is seen, inflated to explode. It would seem that it explodes at any time and the next day it is decompressed, after having given birth to its 5-meter calf and several tons of weight, with the whale swimming by its side. Very rarely white is born. The curious thing about this story is to have witnessed the behavior of calving whale Above an albino calf! 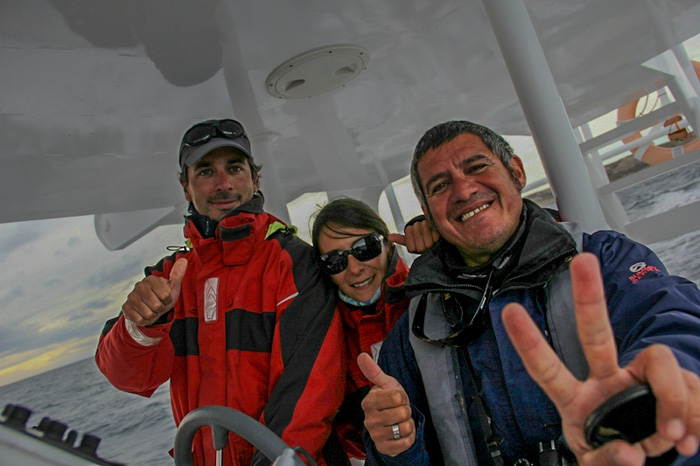 The photographer and the crew of the semi-rigid boat

On July 2, 2012, it was the day on which the stars marked the meeting. One more excursion of Southern Spirit, a typical excursion of whale watching, sailed a few lucky tourists with Justine Guevara at the helm of the semi-rigid boat, Juan Pablo Martorel as whale guide and Luis Pettite, in charge of taking pictures of tourists and events marine No one better than Luis himself to tell the story of this story: 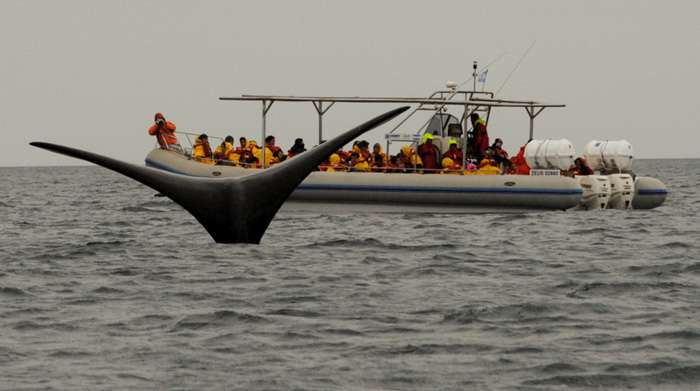 “We approached what we assumed was a copulatory group of right whales, and we maintained a prudential distance, in the group there was a female accompanied by three other adult whales, showing the typical evasion behavior towards males seeking to copulate, swimming at great speed. At a certain moment, the female made a turn, showing a pectoral fin and going belly up, I photographed the whole sequence, when with great surprise I saw through the telephoto lens, The female gave birth to her calf, and from her vagina there was a pink tail, which added more surprise at the moment: She was giving birth to a white whale! This was how I got the first pictures of a Southern right whale birth, something that these big mammals from the sea, kept secret. ” 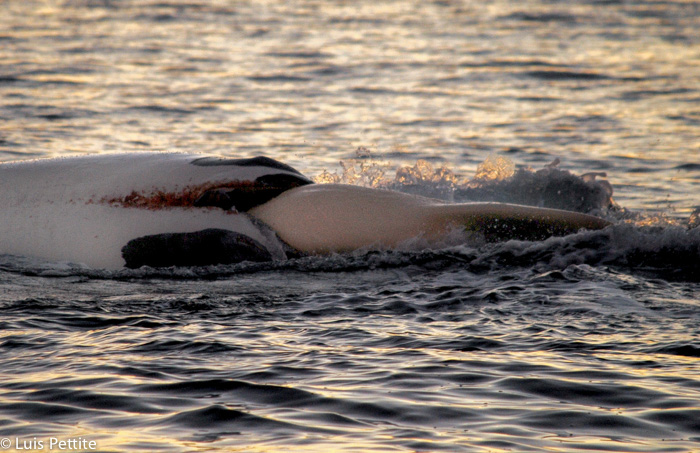 “I took pictures of the female’s head and the gray spots on her back. It was a whale about 16 meters … Huge! Since one of his callosities had the shape of an arrowhead-like those used by the ancient aborigines to hunt, I named her “Tehuelche” (like the Indians in this area). The sun was already falling on the horizon and it was time to return to port. Night navigation is not allowed and Naval Prefecture Argentina asked us to return. At that moment I understood that nature gave us an incredible and unique moment, to be witnesses and give faith: Tehuelche was upside down giving birth to her white baby, we said goodbye to them when the baby was a third out of the belly of the mother ” 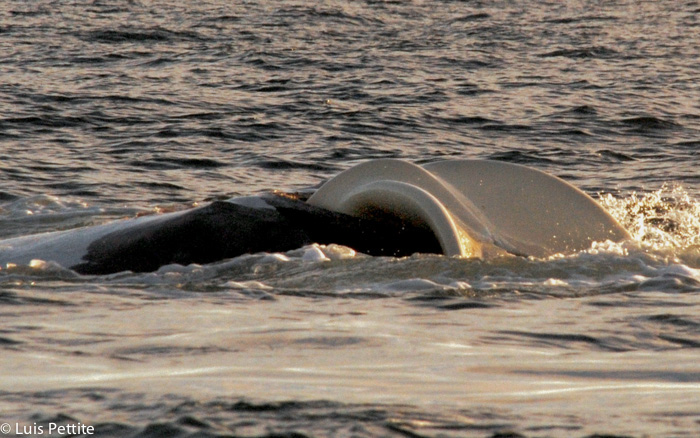 This achievement of high documentary interest had the recognition of Dr. Mariano Sironi, I.C.B. (Institute of Whale Conservation) who highlights the scientific value of this observation. According to the researcher, “the excellent photographs obtained by Luis Pettite has allowed them to search and find Tehuelche in the photo identification catalog of the right whales of Peninsula Valdes. The file that has been growing and has more than 2,800 whales identified, some since 1971, this database has an incalculable scientific value, which is enhanced in cases such as this unique observation made by Luis, Justine and Juan Pablo, in Puerto Piramides “…

Vicky Rowntree, Director of the Southern Right Whale Program of the Whale Conservation Institute / Whale Conservation Institute – Ocean Alliance, provides details on the life history of the Tehuelche whale. “It’s whale number 1.871 in our catalog. It is a beautiful whale, with gray spots on its back. Your registration indicates that we photographed for the first time on September 2, 2004, and for the second time on September 26, 2006.
Now, the reflection of the tireless Luis Pettite: Is the birth of the whales at night? Do they do it so as not to be exposed to their natural predator, the killer whale? That night was a full moon night. Will births be more frequent on full moon nights? ” Accompany other whales at the birth of their baby to help the baby stay afloat so he can breathe, why his company? ” 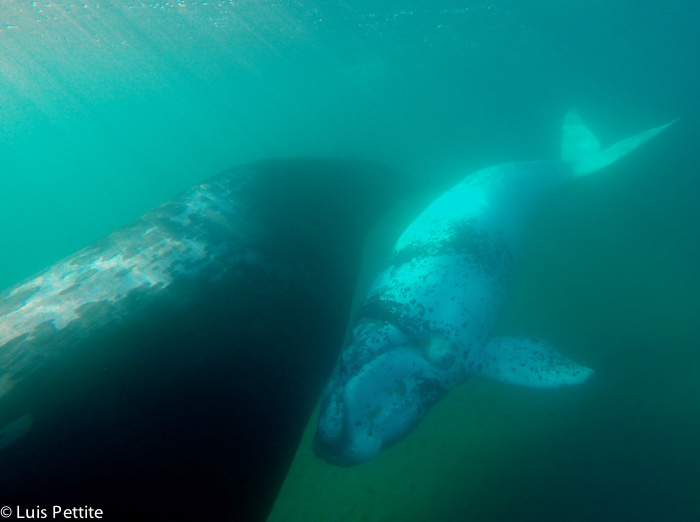 the calf swims with his mother

“Eight people in the world were privileged. Surprise, joy, euphoria, adrenaline, total happiness, we had all those who were in the boat, we share this unrepeatable moment.
Being the first humans to witness a secret that kept nature, until today.