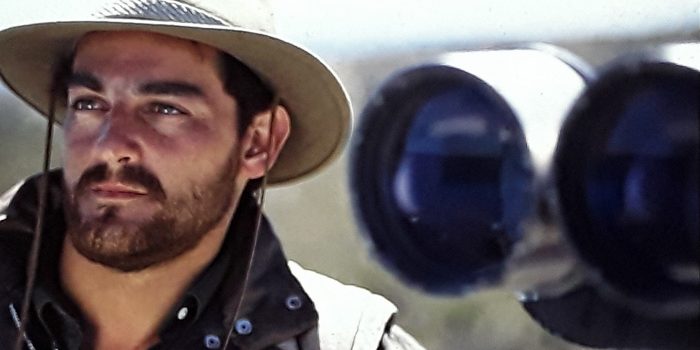 The Park rangers crew was created by the province of Chubut, on September 29, 1967, it works in the more than 400,000 hectares that make up the 11 Natural Protected Areas of the province of Chubut. Some of these men and women left and continue to make their mark in the Punta Norte Reserve.
To find the tip of the ball to the world of killer whales, I have to start talking about Juan Carlos Lopez, a reference of conservation in the province of Chubut, and all of Argentina. He was in charge of awakening the interest of the world scientific community, regarding the particular feeding behavior of the orcas family of Península Valdés, known as intentional stranding. 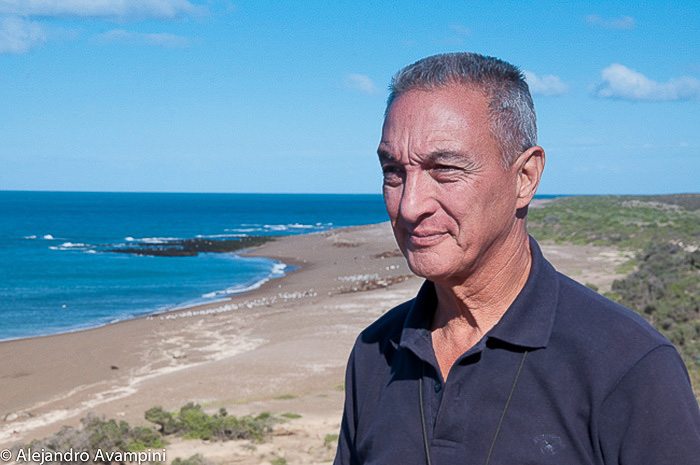 The beginnings of Juan Carlos Lopez as a ranger in the Reserve of Punta Norte were in 1975, with so much time in that natural scenario and as a good advance; He knew how to take advantage of having a similar approach with these animals to carry out the first studies of the behavior of the orcas ( killer whales ), which is known in Peninsula Valdes. Very little was known about them, for the lack of a permanent systematic observation. That discipline that characterizes him allowed him to sustain during the 13 years in which he carried out his task in the reserve, to make an impressive file of information about orcas and their complex family interaction. A nice book to know more about this work is the book of its own authors Orcas Between Myth and Reality.

Since several decades ago, Juan Carlos Lopez offers talks in schools, universities, and audiences, in Argentina and abroad, where he shares his knowledge and experiences, fostering respect for nature and awakening in some students the initiative of wanting to follow a similar course. Such was the case of that biology student named Roberto Bubas, pushing him towards his own destiny with the orcas. 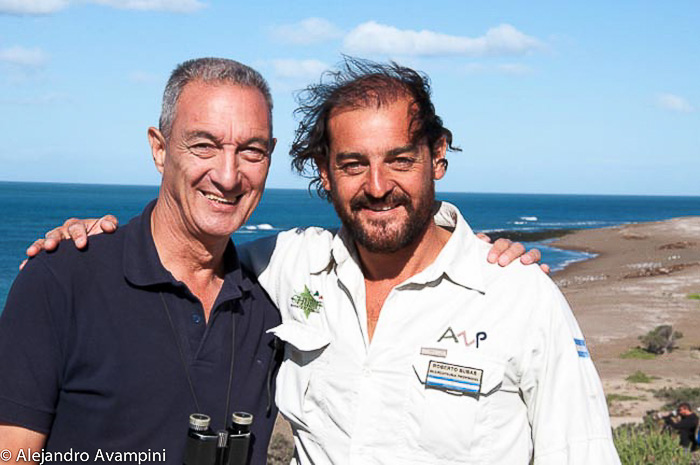 That’s right, Roberto Bubas, a personal friend and regular guest of Del Nomade Eco Hotel, is a great explorer of nature. Endowed with a very particular connection to the world, he wrote several self-help books. He dedicated and continues to dedicate a large part of his time to analyzing his own experiences with orcas and their environment in general. This enthusiastic and picturesque character from the province of Chubut also holds conferences around the world. The purpose of his daily walk is to show the human and animal nature that unites us to this beautiful natural environment called Universe.

With his harmonica, time and contemplative spirit, he spent more than a decade as a ranger in Caleta Valdés and Punta Norte in Peninsula Valdes and achieved a unique affinity with these feared marine mammals, generating crossroads in the scientific community and awakening a strong sense of admiration among those who venerate nature. 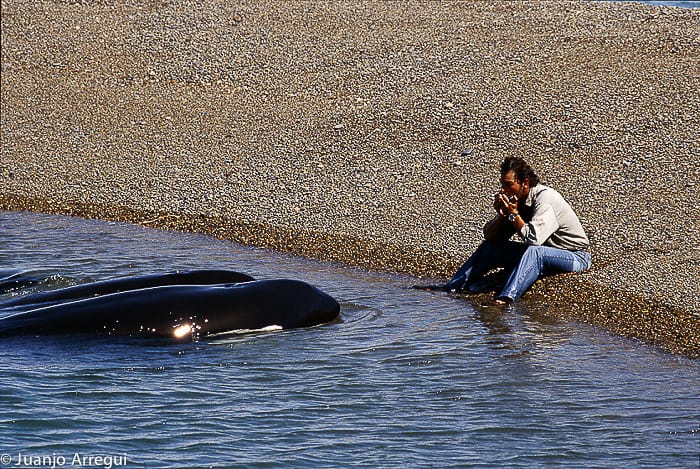 Roberto Bubas play his armonica for the orcas in Peninsula Valdes

Roberto Raffa, the last of the Mohicans, born in Trelew and part of the State Nature Reserves since 1986, began his work as a Park Ranger in 1991. A romantic, devoted to wildlife in its natural environment, Raffa returned to his post in Caleta Valdes in 2012, after an 11-year absence, and here he remains, living his own experience with the Orcas. Attracted by the curiosity and admiration evoked by these amazing cetaceans, he has participated in several memorable encounters and has developed a relationship with them. One of his most powerful memories with the Orcas came while working with a Brazilian Documentary Crew from “Red Globo”. Lea, a female orca from the resident population moved in close to shore, in the breaking waves close to where Raffa was standing, and there they locked eyes in an interchange of sensations that consolidated in an instant all his life experience.
Here I have provided a video with “El Raffa”

Hector ¨El Turco¨ Casin is, without exception, the most experienced of the Park Rangers of Chubut. For the last 27 years, he has worked accompanying scientists, documentary film crews and nature photographers, all of whom will confirm his excellence. 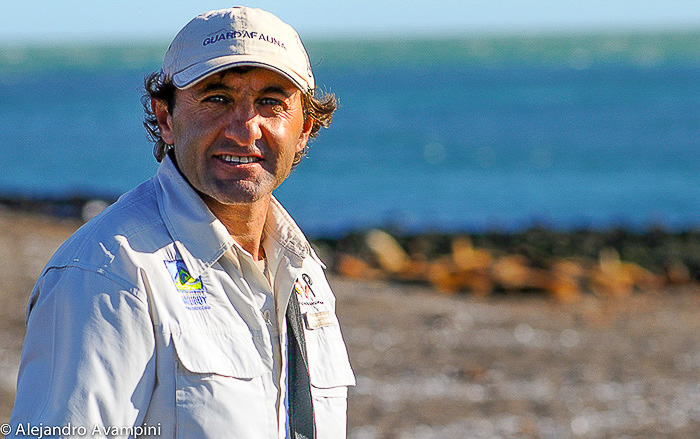 Hector has worked with all of the major Wildlife and Nature production teams that have been attracted to this natural paradise. National Geographic, Discovery Channel, BBC and Animal Planet, to name a few of the most recognized, as well as other production teams from France, Italy, Germany, Japan (TBS and NHK) and many others who have come to Chubut and the Valdes Peninsula to document its unique wildlife. Due to advances in technology and upgrades in equipment and quality, most of these production crews repeat their logistics in the Valdes Peninsula every couple of years, returning not just once, but several times! 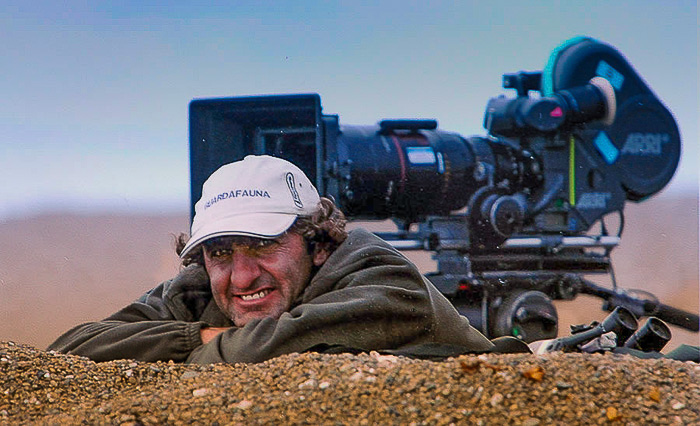 His function involves supervising the approach and distance between humans and wildlife in order to minimize the impact made on wild animal behavior. At the primary attack channel in Punta Norte he keeps the photographers and film crews from moving in too close to the sea lion colonies or from exposing themselves above the hidden filming area in an effort to not alter the sea lions natural behavior. With respect to filming the whales both above and below the surface, Hector is the one who will choose with which animal the observations and interaction will occur, avoiding mothers and calves and looking for animals with sociable behavior. 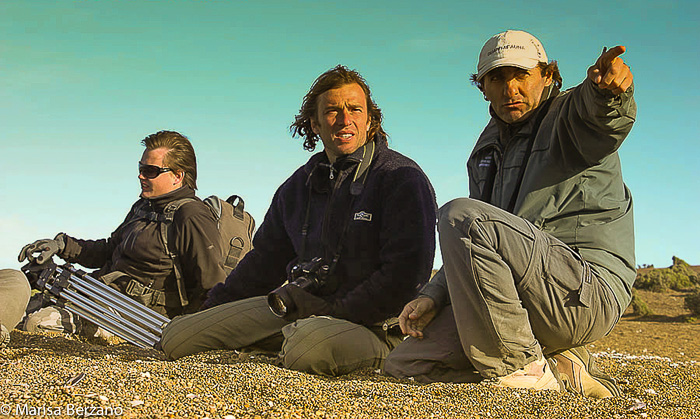 Over the last Orca Season, Hector supervised a group with Andres and Dario Bonetti along with me, in the primary attack channel at Punta Norte. With his sixth sense, acquired through years of experience, he would anticipate the place and moment of the Orcas attacks, allowing the photographers and cameramen to be prepared and focused at the precise time and place.

International producers are the most interested in achieving a space in the attack channel, that is why the permits are requested with a lot of time in advance and the prices vary if the people are Argentine or foreign. If you are interested in having a place in the attack channel, please contact Hector by mail, he is in charge of processing the requests hcasin@chubutur.gov.ar