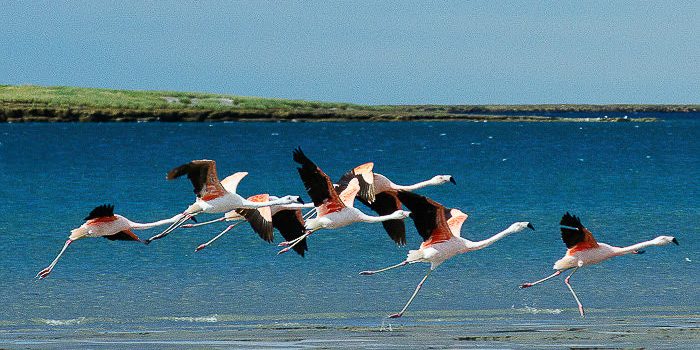 The Southern Flamingo is a large bird, most often seen in flocks. They can measure five feet, are easily identified by their pink color on the outer feathers, their long neck, long legs, and large wings. The legs have short toes, which are also webbed, helping the bird when swimming. Male flamingos are larger than females and this feature is the only visible difference between the sexes. 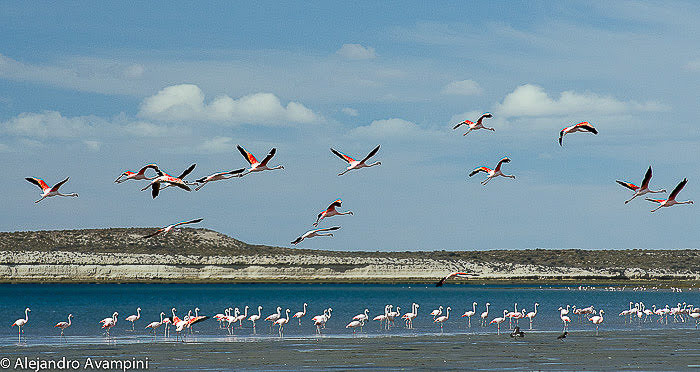 The color of their feathers are acquired by the food they eat, that’s why their offspring are born whitish and take on the intense pink color from the small crustaceans, which form the major part of their diet. Flamingos are not resident in Peninsula Valdes area, however, they nest in lakes in the Province of La Pampa. They are very wary birds and are easily disturbed by human presence. They can be very difficult to approach and photograph. The best way we have found to photograph them is to wait, camouflaged, at low tide. As the tide comes in, the birds will come to feed closer inshore. 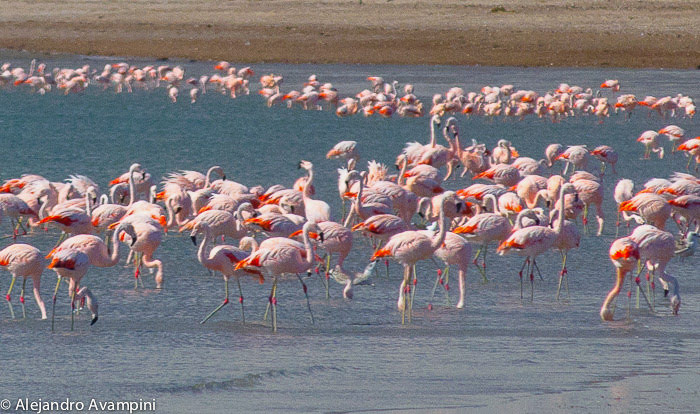 You must take great care not to alarm them or your opportunity will be lost. Photographing Flamingos requires a great deal of patience, as many of the professional photographers who live and work in the area will attest. Flamingos are not at all used to humans, living completely wild, and are, therefore, very elusive. Remember that Valdés Peninsula is an important area for wildlife to raise their young, and, as such is deserving of respect and minimal human impact. There are already 300,000 tourists visiting the area each year and the Peninsula is to some degree, affected by human greed. Please help to raise awareness of the need for respect for our wildlife by your own example.

Flamingos are monogamous. and before pair-bonding, males and females gather in groups of up to 150 individuals, and perform the so-called “wedding march”, with their necks stretched upwards, moving head vigorously from side to side and up in one direction. The march is accompanied by a strong hoarse croak from the whole group. The birds then form pairs. Weeks later, nesting begins. Flamingo breeding colonies are characterized by a gathering of thousands of individuals. The nest is usually made of clay, in the shape of a truncated cone, with a depression in the center. A single egg only is laid. After 30 days of incubation shared between both parents, the young are born with white plumage and straight beak, which takes the hooked form as they grow. At the age of a week or so, the young birds gather in creches, which can number up to a thousand individuals, guarded by several adult birds. After a few weeks, the appearance of the chicks changes. Plumage color turns to grey, with black legs, and the beak curves to resemble the parents’. The creches stay together until the age of three months, after which, the young are able to fend for themselves.