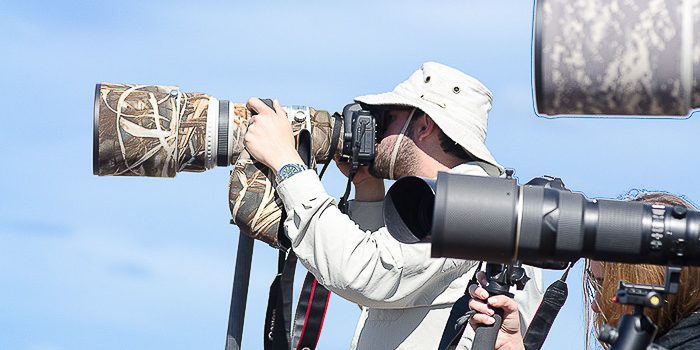 With each new whale watching season, national and even more international photographers discover, usually through the internet, the existence of this natural paradise, motivation enough for feeling called to the Valdes Peninsula. From September to December there are several of us, amateurs and professionals, which reencounter every year here in Puerto Piramides. Passion for the whales causes each season to be full of energy and emotion, especially after having suffered their presence during the rest of the year. 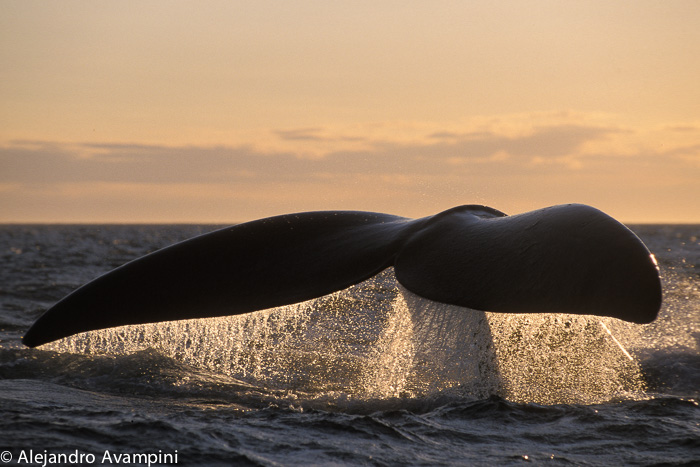 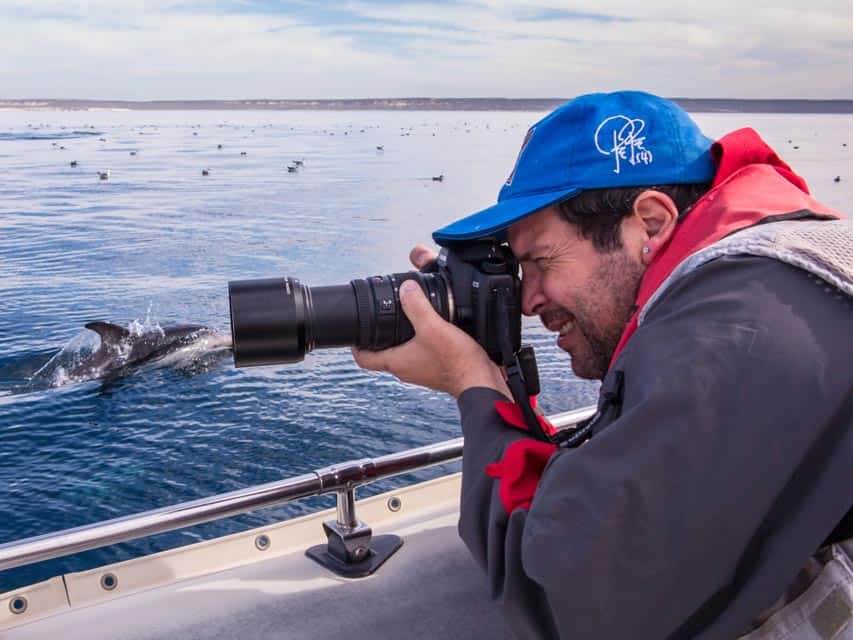 Guillermo Giagante is a sensitive artist with a great ability for translating unique moments which play in space and time, into 2-dimensional images. The images he has achieved in the Valdes Peninsula are surprising, whether, of crashing waves in Pardelas, the cliffs of Punta Delgada or some other landscape, they appear as if observed in slow motion, with a transparent and unembodied spirit. With this particular vision, his images of the Valdes Peninsula are enjoyable to observe. Guillermo is one of the photographers that come each year with his family, in an almost obligatory pilgrimage, to renew and compliment his existing whale archives. 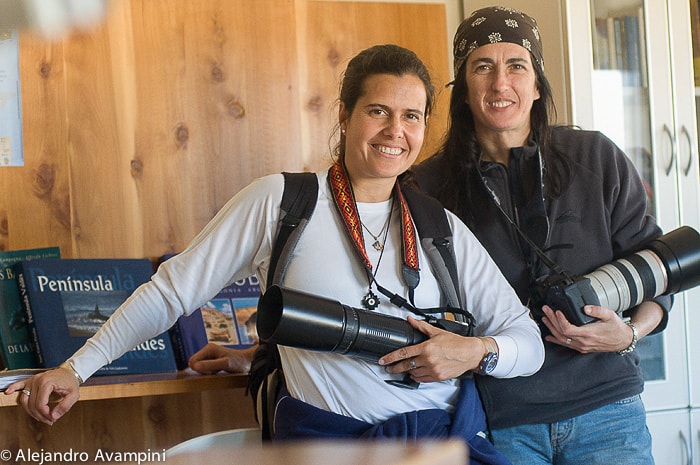 Ana Ponce coordinates Photo Trips and Belen Etchegaray is the director of ANP, Argentine Nature Photography (FNA in Spanish), and they visit us each year with groups of amateur nature photographers. For more information about the Photo-Safaris they organize, I recommend that you make contact. They are very serious about their profession and enjoyable people to be around. 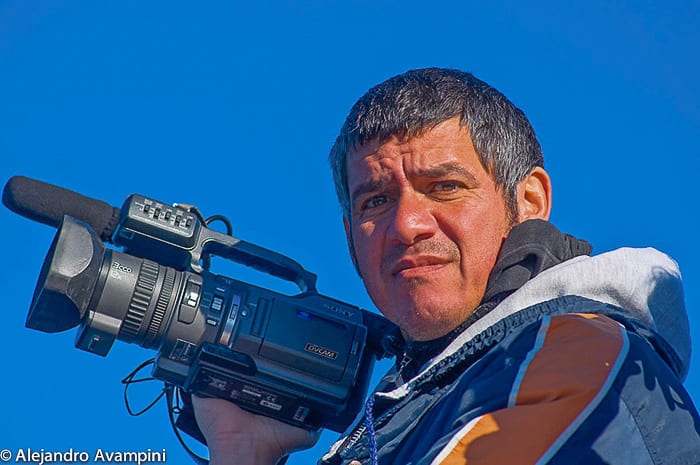 Documentary cameraman and photographer, Luis has made the Valdes Peninsula his home over more than 30 years of documenting its flora and fauna. During whale season Luis spends the better part of each day with the whales, observing and documenting the behavior of these amazing cetaceans alongside the tourists in their whale watching excursions in Golfo Nuevo. His enthusiasm and years of diving experience have allowed him to film the whales up close, in their aquatic environment, dozens of times. 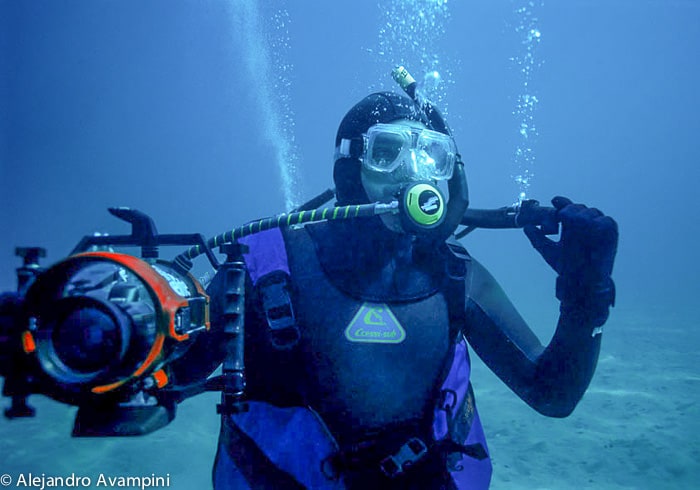 Luis has participated in 9 Orca seasons, patiently waiting close to the attack channel in Punta Norte and capturing unique images of the Orcas of Valdes intentionally beaching themselves in an attempt to capture sea lions while bathed in the sublime light of sunrise. Several of his images have been used in documentary films produced in the U.S., Europe, and Asia. Luis is constantly collaborating with different foundations and institutions in the areas of behavior, identification, and fundraising. With so much time and dedication, and a camera always in hand, Luis was the first and only photographer in the world to capture images of a Southern Right Whale giving birth. A close and dear friend and easy person to find in Piramides’ limited night-life, Luis is always in a good mood, humorous and with a predisposition for making those that surround him feel comfortable. 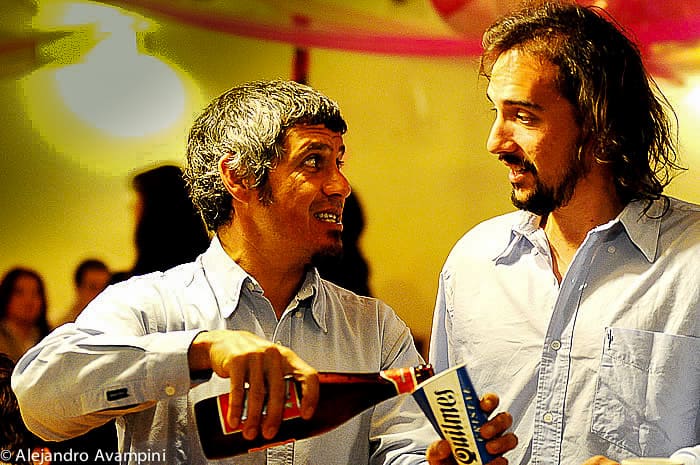 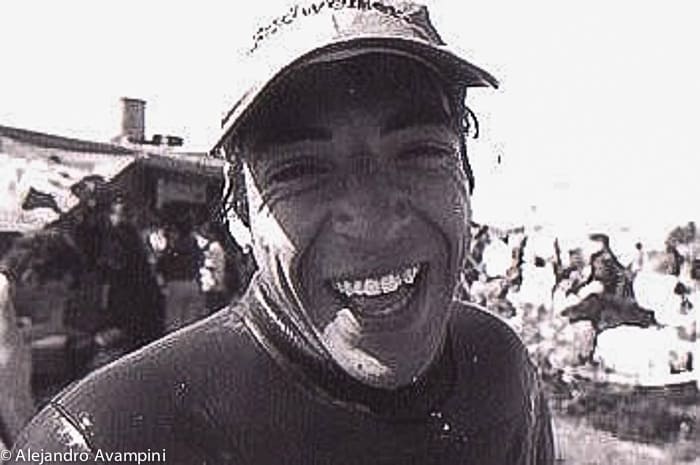 Daniel “The Octopus” Casielles With an innate capacity for learning and understanding, Daniel is an underwater cameraman, editor, and musician. His artistic nature is made evident in many videos and local television productions where his work is presented. Entirely self-taught, at a young age he saw in Puerto Piramides his place for growth and twenty years later he has developed a life immersed in nature and maritime activities. Below is an unforgettable example of his work. This video was captured on the 10th of May 2008 when a group of approx. 150 Pseudo Orcas appeared in the bay of Puerto Piramides, coinciding with the eruption and activity of the Chaiten Volcano in Chile. The volcanic ash from this eruption was blown west until reaching the shores of Golfo Nuevo. For several days the horizon line was lost in a foggy haze of ash and the Pseudo Orcas appeared, swimming non-stop back and forth in the bay as if disoriented. A possible theory is that the minerals found in the suspended ash disrupted their echolocation, disorienting their natural guidance abilities. The reality was an unusual situation with unique, warm, natural lighting, ideal for documenting these rapid marine mammals, a rare situation immortalized by Daniel’s video. 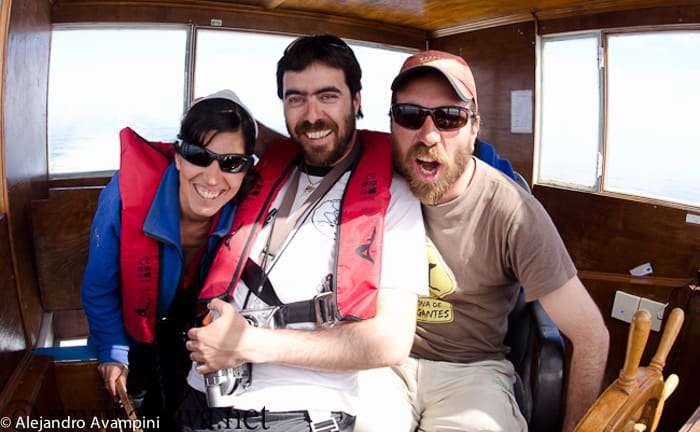 Alexis Fioramonti A relaxed member of the aquatic community, Alexis is found in the photo above between Paula Torres and his brother Pablo, at the helm of Whales Argentina’s whale watching catamaran. Alexis first arrived in Puerto Piramides, when still very young, to visit his older brother. He fell so in love with the town that he grew into and formed his personal and professional life in Puerto Piramides. He began his career as a cameraman working for Luis Pettite, as with many of the whale photographers in town. Having earned his space in the maritime realm as well as the artistic, Alexis is also now a whale watching captain and whale guide who has forged his identity in the local maritime community. 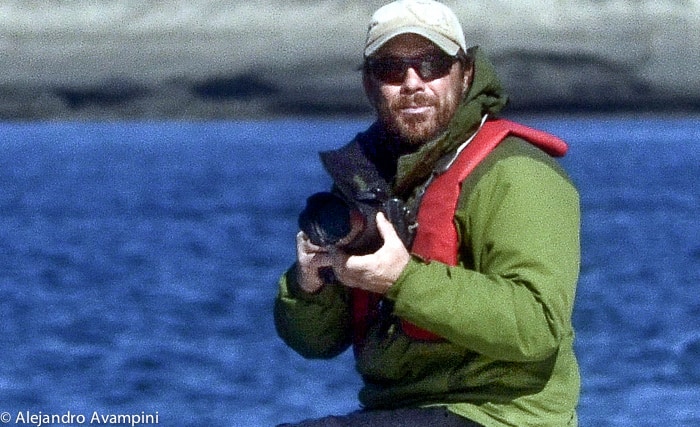 Stephen Jhonson With a Fervent and unconditional love for nature and far from his birthplace in Utah, Stephen made his way into Puerto Piramides almost 20 years ago. Attracted to the sea and the unique energy of the whales he began photographing these amazing cetaceans while working for Luis Pettite. For more than ten years Stephen has and continues to work as a photographer aboard the whale watching boats of Jorge Schmid, Punta Ballenas, on the second access road to the beach. Stephen also dedicates much of his time to underwater photography and some of his work and observations can be seen on his blog. The photograph below is just an example of his artistic expression in the depths. Stephen has collaborated for many years with different foundations and institutions and has been invited to exhibit his work in different galleries. 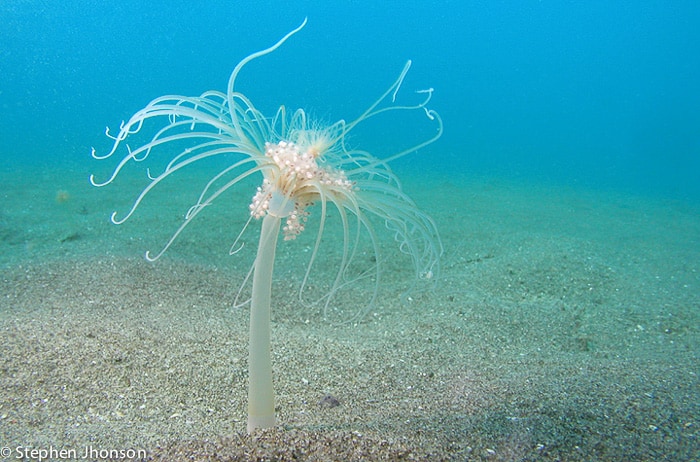 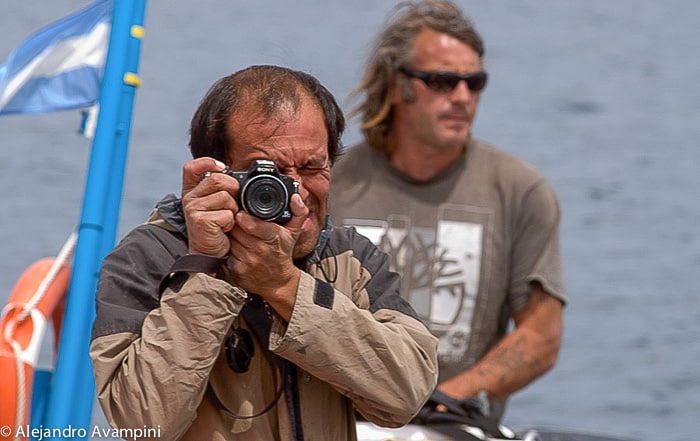 Angel Velez Without a doubt, Angel is a photographer that has reached the heights, having established his office in the crow’s nest of Whales Argentina’s Catamaran. The images he has captured in 17 years of work on the sea have been published in the most diversified ways, from varying editorials to giant billboards along the 9 de Julio Avenue in Buenos Aires. With this original perspective and angle, he has achieved aerial images difficult to capture due to the movement of the crow’s nest and impossible images for those who suffer motion sickness. He has collaborated in photo-identification of the whales along with other scientific projects. In the posted image, the catamaran navigates amongst orcas while Angel captures his amazing images. 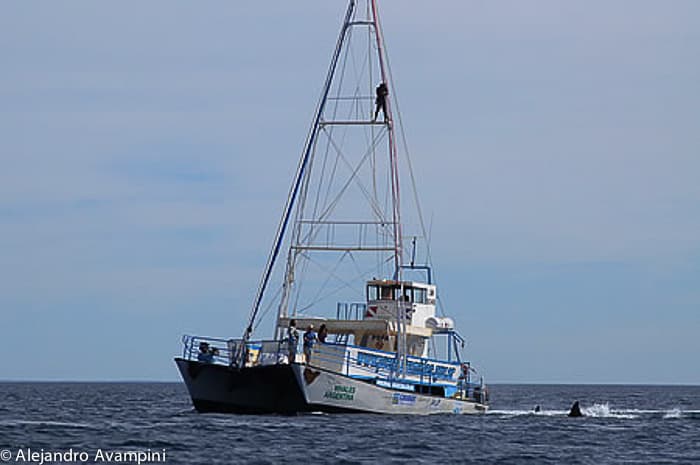 Angel Velez taking pictures from the catamaran to the orcas pod 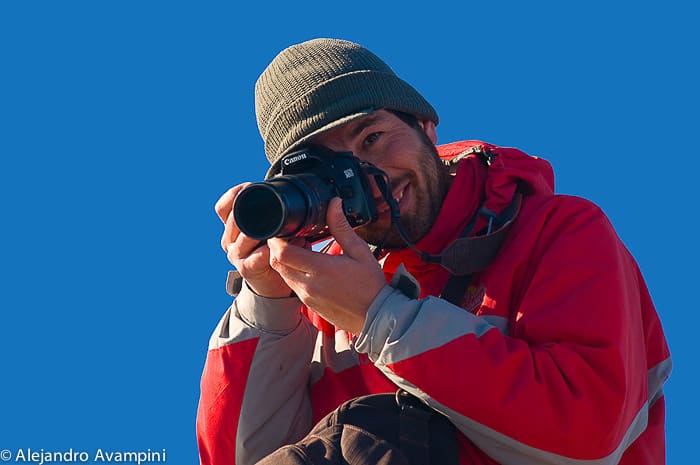 Jore Barone Often surreal and juxtaposed, the images created through Jorge’s visión of whales and whale watching tours are just as captivating as his photographic work with the local artesian fishing communities. Jorge studied photojournalism and worked as an independent photojournalist for different national and provincial magazines and newspapers. Jorge and his family left greater Bs. As. many years back to call Puerto Piramides their home, a change in the air that allowed Jorge to become a reference in Argentine maritime photography. Jorge often gives photographic clinics and courses and continues to collaborate and actively participate in varying educational areas. 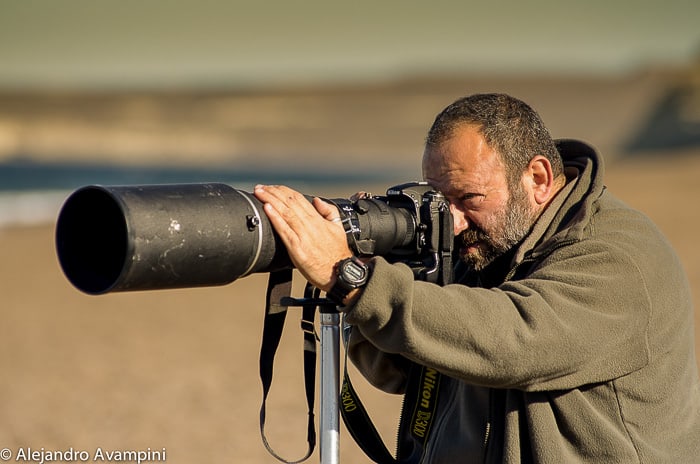 Nacho Corbalán With an innate don for observation he knows how to capture each moment with a special sensitivity that has been his from birth. Continuing in his father’s profession it could be said that in his core he breathes photography. Many years passed before returning to a place he had frequented since 1994 when he came to photograph Orcas in Punta Norte. Aside from Orca attacks to sea lions pups he obtained wonderful portraits of the park ranger, Beto Bubas amongst other characters of the Valdes Peninsula. His whale photographs have brought life to many National Tourism campaigns. In his 30 years as a professional photographer, he has been published in as many editorials as can be imagined and with equally varied subjects. Nacho has worked for Perfil, Atlantida, Clarin, and others, his images standing out in their graphic publications.