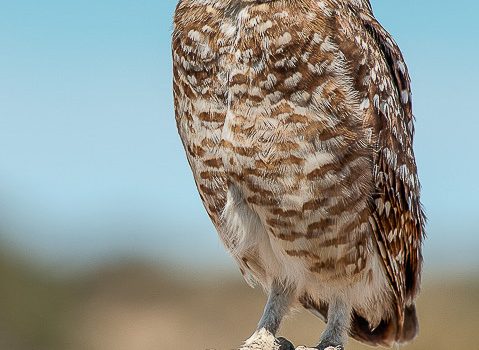 The Burrowing Owl commonly excavates a burrow at the side of fields or by roadsides. Should the entrance become blocked for whatever reason, it will excavate another burrow at the edge of the field. The nesting season runs from October to December. The chicks hatch in 28 days. During hot spells, they can be seen rubbing their beaks or cuddling each other. The owl is not afraid to man, on the contrary, it easily adapts to his presence. It lives in open grasslands and can be found in the Caleta Valdes and Punta Delgada. Feeding Burrowing Owls have been subject to persecution by Man, due to irrational superstitions. As a result of this, in addition to placing the Burrowing Owl in danger of extinction, this persecution has altered the environmental balance.

This is because, as well as birds, scorpions, insects, and other small mammals, which, if allowed to multiply unchecked, would have an adverse effect upon agriculture, they eat rodents which are known carriers of Haemorrhagic Fever, or O’Higgins Disease, which is endemic in Argentina. Many times the man usually irrationality attacks the owls, especially because of superstitions. The Burrowing Owl has a refined sense of hearing. They can hear sounds of low intensity that allow them to detect the presence of small prey. The thick layer of feathers covering its flat face operates as a kind of receiver screen that helps to focus sounds on the ears. Their natural predators are ferrets, weasels, cats, and foxes, besides the man. Whilst out and about, you are sure to see Burrowing Owls and, through binoculars, you will be able to see the deep and direct gaze of their large eyes. The owl’s eyes, like ours, are front facing, resulting in binocular vision which allows a refined perception of distance. The eyes have many photosensitive cells and large pupils, which permit the bird to distinguish objects clearly in low light.