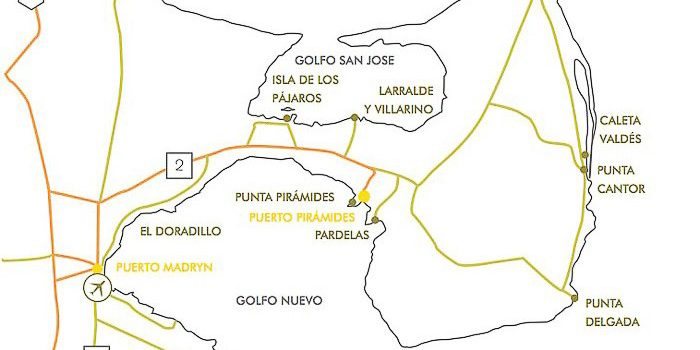 Driving on gravel involves not going more than 37 mph (60 km / h ) and not touching the brake when cornering. Inside Peninsula Valdes, there is no internet sign, except near Puerto Piramides, that’s why we dedicate this article for you to use in this adventure. You must have the cell phone battery charged! 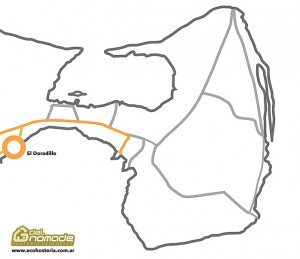 El Doradillo, is one of the beaches between Puerto Madryn and the Peninsula Valdes Natural Protected Area. It is located in an area where the Ameghino Isthmus begins that joins the Peninsula at its southern end with the rest of the continent, forming an important repair area within the New Gulf, with shallow and calm waters. El Doradillo extends from Arco Peak to Prismatic Hill and has the enormous attraction of being one of the few places in the world from which southern right whales can be sighted from the coast. Dozens of mother and baby whales are in this area, during the breeding season, between May and November. El Doradillo is a Protected Natural Area, which has an extension of several kilometers and in whale season, it is forbidden to go into the sea. It is an intangible area that protects whales at a moment as important as it is to live their first months of life. These beaches are the favorite of whales with their newborn calves. Although the waters of the two gulfs that form the Peninsula Valdes are great maternity due to the tranquility of its waters, many of these mother whales choose to have their breeding in the area of El Doradillo. You can see from the coast more than thirty whales with their young. It is really hard to explain in words how surprising and moving it is to be so close to giant marine mammals, sometimes a few meters away from the beach. 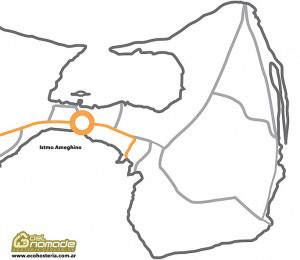 The Ameghino Isthmus is the first place to enter Peninsula Valdes. It is a narrow strip of land of 35 kilometers long that connects the continent to the Peninsula Valdes. In it works an Interpretation Center, which provides visitors with the necessary information to enter prepared for the adventure. By means of its exhibitions, it allows knowing the complex and delicate interrelations existing between the wildlife, the geography and the man, the main agent of change in the environment. It has a complete sample of material about the Patagonian land fauna, composed of species such as the guanaco, Patagonian ostrich, mara, Piche, wildcat, red fox, gray fox. Also, you can know the marine fauna species that are concentrated in large settlements throughout the Peninsula. The halls display data and some fossils of the different protagonists of marine life: elephant seals, sea lions, killer whales, whales, dolphins and birds such as penguins, white-chested cormorants, southern gulls, and seagulls. 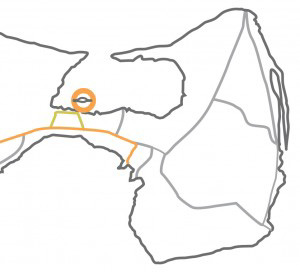 In the same roundabout of the Ameghino Isthmus is the detour that leads to the Birds Island, a reserve created in 1967 and named for the presence of birds that nest there every year and others that come to feed and reproduce. it is not an island since when lowering the tide this portion of the plateau is united to the continent, characteristic geomorfológica that denominates Tombolo. Then we can say that this tombolo has a great biological value because it is used as a reproductive area of ten species of marine and coastal birds and others that also frequent it. It is a very special place, maybe even a little mystical. It is evident that its form inspired Saint Exupery in his book “The Little Prince” until he draws it in one of the first pages. The reserve has a small interpretation center equipped with a pair of powerful binoculars to see the birds that fly over and nest in this incredible piece of land of no more than 1.5 hectares 800 meters away. The best time is from September to April. 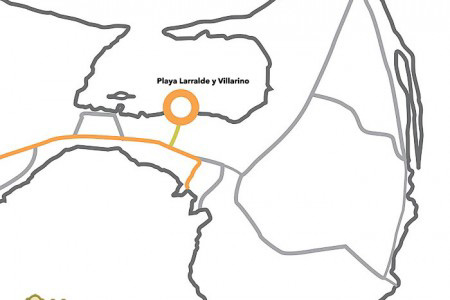 In the San Jose Gulf, we find these fishing villages of the coast and shellfish, made up of about 200 people. The most important is in the Riacho, which has a school, but there are also located shellfish in Bengoa, Birds Island and Larralde, living in very basic conditions, but within a natural environment that overflows with energy and balance. The extraction of bivalve shellfish began in the ’60s and was developed in different ways over time. The harvest is done by hand, through the work of shellfish divers and coast hand-picked who take advantage of low tides to access the mussel beds. 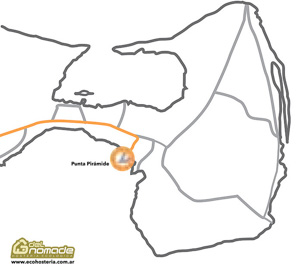 Created in February of 1974, the Punta Piramide Reserve has an area of 132 hectares. This reserve is formed by not very high cliffs that develop sinuously, alternated with small beaches, the soil is sandstones and fossils. The vegetation is scrubby as in the rest of the steppe. Between the end of December and April, this reserve becomes the largest sea lion breeding colony on the Peninsula Valdes, attracting animals from different sea lions colonies in the area such as Punta Alt, Punta Loma, and Las Charas. The sunsets from Punta Piramide are all unforgettable. It is one of the few places in Argentina where you can see how the sun hides behind the sea. It is also a must for those who want to capture beautiful moments, with their camera, during the whale season. 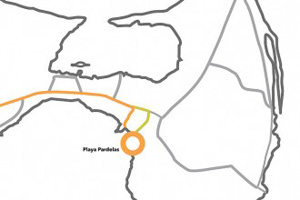 Pardelas is a beach that is 15 km from Puerto Piramides, it is excellent for lovers of fishing, snorkeling, and diving. To get to this place you leave from Puerto Piramides on national route 2, until you find a sign indicating the right side that says Pardelas 11km. From there, follow the path that leads to the beach. You can also access by trekking from Puerto Piramides, skirting the beach along the cliffs and passing through the Pardelas dunes. It is possible to go at any time, even when the port is closed, you can make a trip to this beach and make a whale watching from the coast, with a unique sunset. Or in the summer, enjoy its crystalline waters, practice snorkeling and if you are animated, make jumps from the highest clay formations. In front of its coasts, you will be able to see the Islet of Pardelas. It is a large piece of clay formations that emerges 200 m from the Homonymous Point and can be seen from Puerto Pirámides, despite its distance (just over 6 km). It has about 80m x 40m and is presented as a massif in the water. It is one of the most common diving places in Puerto Piramides because one can repair the wind, wherever it comes from. Decorate the photo at any sunset. In sightings and fishing or nautical trips, captains have to be very careful, especially with the extraordinary high tides that cover the island completely, leaving only a spot in the water. 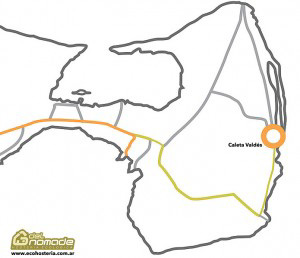 Caleta Valdes landline line that starts in Peninsula Valdes parallel to the coast, separated by the sea that covers the crack and accompanies the outline of the Peninsula Valdes along 30 km. Towards the North it is closed, and to the south, it has its mouth, through which the water of the Atlantic Ocean that forms the Cave Valdes enters. The sea does not stop contributing sediments to this entrance, resulting in the mouth of the cove becoming narrower and narrower. In recent years the sea contributed approximately 1400 tons of pebbles per day. During the 19th century, when the mouth of the cove was much wider, several boats entered up to 5 km inside to load wool from the fields or take refuge in days of a raging sea. Today, for lack of draft, it would be impossible for a vessel of that size to enter. From the viewpoint, and following the paths provided by the  La Elvira ranch, you can contemplate and read about the flora and fauna of the place, among which the elephant seals, penguins and (from September to December) orcas predominate. 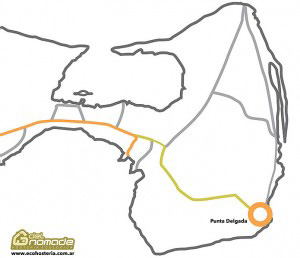 The Punta Delgada Lighthouse has located 71 km from Puerto Piramides, located in the southeast corner of the Peninsula Valdes. The ranch was built as the headquarters of the Argentine Mail Service and as a casino for the Argentine Navy. Ten years ago, it works as a country hotel and restaurant. It has an extension of 7 coastal kilometers. Beaches with the highest concentration of elephant seals. It can only be accessed after having lunch in the restaurant, accompanied by specialized guides. 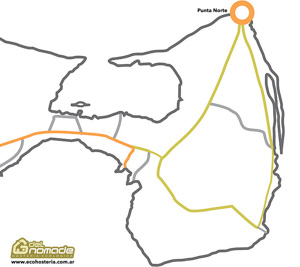 Punta Norte and the rest of the elephants of Peninsula Valdes are the only elephant’s seals colonies in the world in the continental territory. This one, in particular, is accessed by provincial route 3, traveling almost 75 kilometers to the northeast, from Puerto Piramides. There is also a sea lions colony with a good number of individuals in late August to give birth to their young, staying until April or May, before returning to their marine activities. It is the scenario where between February and April they see the orcas (killer whales) attacking the sea lions. 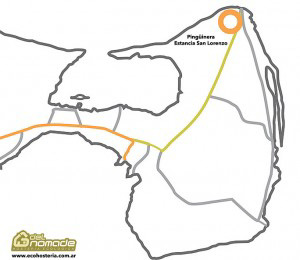 The penguin colony of  San Lorenzo Ranch, is northeast of the Peninsula Valdes, on San Matías Gulf with which it is contacted through almost 5 kilometers of coastline. The area functions as a reserve for these multiples (ovine exploitation is allowed in sectors) and has a management plan prepared in accordance with international guidelines on the matter. It has a shrub and herbaceous steppe type vegetation. One of the main attractions is the large Magellan penguin colony, which is specially adapted for tourist use. It also has a small colony of elephant seals on its coasts. This was one of the places where sea lion colonies were exploited between 1918 and 1960. Currently, this reserve is intended to preserve all the species that live there. The Ranch was developed, from the beginning by cattle exploitation. Between the years 1918 and 1960 colonies of sea lions were exploited in order to extract leather and fat. The first was used in leather goods and the fat was converted into oil for industrial use. When the activity was prohibited, the field was exclusively used for sheep breeding.